Yesterday (22nd June 2013) The brand new First Direct arena opened its doors to 3000 local people for a FREE open day.
This event was for the management of  arena (SMG EUROPE) to show people who hadn’t been on the previous tours what it was like inside the £60m arena, it was also, and mainly to test the area’s features which can only be tested with thousands of people inside.

Tests included echos from the crowd, testing what noise sound  like from different area’s, and a big test had to be the toilet facilities, 3000 people were all sent to their closest toilet and all told to flush at the same time, this is to make sure the sewer and drainage systems could handle the pressure. On top of getting to be the first people to test the venue there were two live bands there to test the sound, these were both local bands who won a popular voting competition held by first Direct arena which was so popular they had to include a warm up band who were The Puppeteers to warm the crowd for the winners The Scandal played three of their own songs to a very happy crowd. 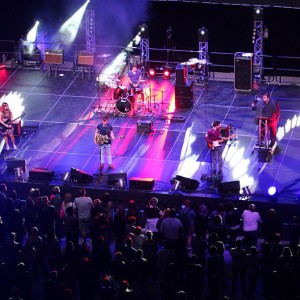 Both bands will have had massive smiles on their faces when they finished knowing they are in the record books as the first two bands to ever play at the Arena, this is something to be proud of and not only that but they were both really good, no faults at al and for new bands to play to 3000 people in such a bit venue is commendable.

I took a few videos of the bands playing, the first song by each band can be seen on here, for more have a look at my YOUTUBE account

Once the music stopped the evacuation sound was sounding throughout the area, not because there was an actual emergency but again to test the arena and the team they have.

The marketing side of the business was to get everyone hyped about the venue to spread the word, to also get them to take photos and post them on all the social network sites, a plot that really worked as according to @TrendsUK

I have been excited about the arena since 2008 when I lived int he student halls on the same land, back then the old building belonging to Leeds Metropolitan University was being knocked down waking me up at 6:30AM most mornings

I also covered it in my uni Course so I have tried to be active in showing my support..

Five years down the line and this amazing large Arena is a reality, apart from a bit of dusting it seems pretty good to go for the public (official) opening in September when Sir Elton John takes the stage, there is a one-off event with Bruce Springsteen (The Boss) in July 24th 2013 but untill then we have the great exterior lights to look at and admire (As seen in the video) To see photos of  the great exterior lighting looks have a look at my photos on facebook.

The day was great and the arena even better than I thought, a slight issure I saw when I frist got there on the day there wasn’t any kind of queueing system, it was a free for all with people slowly shuffling towards the doors to hand

their tickets in no matter how long they’d been waiting people were able to just cut in, It wasn’t in any way dangerous just more to do with time waited and priority. I’ve been assured by SMG that this was just for the open day as the arena isn’t due to open until July 24th the planned barriers are not  yet in place and this is all on schedule, there were also only 2 doors open on the day due to it being a test there was no need to hire more staff to man all of the many doors they have which will be open on any future event day so there will be no problems getting in fast and efficiently.

★★★★★ Overall this is a very exciting building for the city of Leeds, it will not only be bringing the best in Music, Comedy, Sports, Awards and all kinds of entertainment but it will be adding to the local economy greatly, I can’t wait to be attending events in the future, I’m glad I was able to attend before it had officially opened, I’m not likely to forget it. 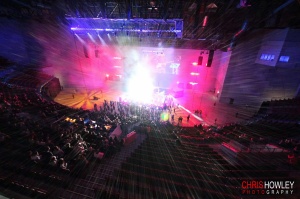 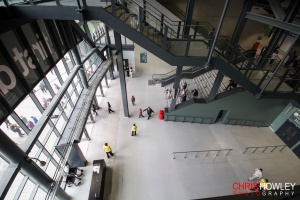 For more information on the First Direct arena, the events coming up and to purchase tickets visit: www.firstdirectarena.com